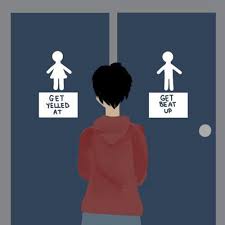 So now, there’s an app for that. Where once there was (& still is, actually) safe2pee.org, now there’s Refuge Restrooms, which helps you find bathrooms with the least amount of hassle. Here’s a question from an interview The Advocate did with her about it which gives you the basic idea:

The Advocate:  What exactly is the function of Refuge Restrooms, and how does it work?

Teagan Widmer: Refuge Restrooms is a web application that indexes and maps safe restrooms for transgender, intersex, and gender-nonconforming individuals. At its core, its goal is to be a place where you can go, type in an address and find the nearest refuge when you really need a place to use the bathroom. Already, the application has over 4000 bathroom listings all over the world (mostly thanks to the data provided by the now-defunct Safe2Pee site) and will only continue to grow as users add new safe bathroom listings.

Additionally, searches are able to be filtered by ADA accessability and unisex designations. That’s part of the service, too, because some bathrooms may not be gender-neutral, but are still safe — i.e. at the local LGBT center.

& In the meantime, students on my campus currently have a petition asking for at least one gender neutral bathroom per building.