Aurora, the cat we found at sex camp many years ago – 2006, I think – died this past December. In my arms. We still don’t know exactly how old she was but she had to be at least 14.

I wrote this piece about her – about getting used to things – that was published in a tiny literary journal in maybe 2008, and I only read it out loud once or twice, so I thought I’d share it so more people could read it.

The full piece is on Patreon, but here’s the excerpt:

Once we left the room to do our workshop on gender roles and sexuality, it was hard not to look around, and the minute you look around wide-eyed in a place like that is the minute you know you can’t close your eyes for a second. We tried not to stare. Masochists and sadists, daddies and mistresses, swingers, pagans, nudists, and queers all gathered at dusk to eat smores around a bonfire. One submissive admitted to me shyly that he needed to learn how to make a smore because his mistress wanted one, and I had to admit I didn’t know how to either. Camping – at least the kind that involves trees and lakes and dirt – has never been my thing. If camping was good enough, we wouldn’t have invented houses. What I didn’t admit to him was that I’d never met a mistress before, and I had no idea if only he was supposed to call her Mistress So & So or if everyone did and I should too. I saw her later eating the tidy smore he’d made her by the fire. She was naked but for a rubber corset. It was a kind of unexpected partial nakedness; usually people are topless, not bottomless, and I wondered why you’d wear a rubber corset if you were only going to wear one thing, and then realized for some people the reason was probably obvious.

When we finally got to our vet, she told us the cat was probably very old and that we’d probably serve her best by putting her down. She had stopped eating or drinking. We took her home and got water into her by pumping it into her mouth with a syringe. Then we’d squeeze high calorie food into her mouth right from the tube. She would gargle her complaints, glugging meows of objection. It was pathetic, but it was hard not to laugh, too. She was not having it, and fought us all the way. But she was a tiny four-pound cat who should have been closer to seven pounds, so she didn’t have that much fight in her, either. We won.

Votes? Should we or shouldn’t we?

He left us today after a week in which he aged a decade. He was the most handsome of cats, and the sweetest, and the softest, and he greeted us at the front door – wherever that front door was – every day of his life until this past week.

Endymion’s responding well to steroids and antibiotics – his blood cells are fat & new and his count is up only two days after going on them. It’s not like there’s anything to make him a young, perfectly healthy cat, but he’s hanging out for now, & we are very, very grateful.

Thanks for all of your love & good wishes. He really is a precious kid to us.

(My wife took this shot yesterday, out in our garden.)

So our big Endymion is on his way out of this world, but right now he’s stable – on a mix of steroids and antibiotics, with another trip to the vet for bloodwork tomorrow. He was  severely anemic and jaundiced yesterday at the vet, and although the jaundice seems to have diminished, he still seems very, very tired.

But he did decide to hang around long enough for his mom to get back here and kiss his big head.

Thanks for all the good thoughts and prayers. We’d rather him around forever, but not if he’s suffering, so we’ll see what shitty decisions we’ll have to make, or not.

(This is one of my favorites of the big goober, taken back in Brooklyn.)

(I’ve gotten a ride. Thank you all for helping out by re-posting this note.) 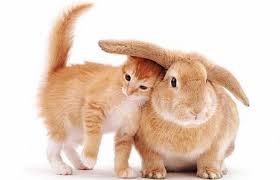 No, this isn’t an April Fool’s joke, and I’m not a day late for Easter: this is a bunny for two people who really, really love bunnies. (The cat’s for me.)

Both of you have a good one.